Vergil in Averno by Avram Davidson 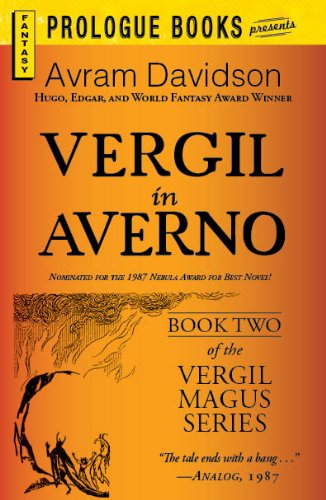 
He was a Master in Arts Magical, but not yet Incantor et Magus Now Vergil Magus, the powerful sorcerer-poet, returns in the long-awaited prequel to Avram Davidson’s bestselling novel of fable and magic, The Phoenix and the Mirror. Here, Vergil’s extraordinary adventures begin as he journeys into the hideous heart of evil and darkness . . . Enter the Very Rich City of Averno and discover a place on untold riches and untamed lusts, of orgies and drunken revelries, of madness and human corruption. Here is a decaying metropolis of wizards and warlocks, where old crones spin webs of cruelty and deceit, and hell lurks in a labyrinth of underworld caves. Vergil has come to Averno to uncover the secret of its eternal fires, the very center of its wealth and prominence. But as he explores the inner sancta of this ancient and heartless inferno, he finds, too, the fiery bed of Poppaea, the beautiful wife of the city’s most influential Magnates. With this forbidden pleasure comes forbidden knowledge, and Vergil is drawn into a web of intrigue that threatens to turn the terrible power of Averno against him. For centuries, the lords of the city have thrived on the bloody sacrifice of their own people. Now they are determined to add one more name to the scrolls of Averno’s dead . . . and to cast Vergil, now an outlaw, into the burning pits of the dying empire.