The Moon and the Sun by Vonda N. McIntyre 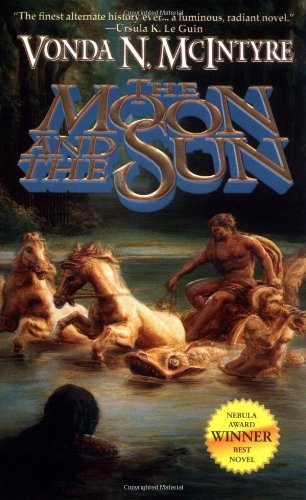 The Moon and the Sun


New York Times bestselling author Vonda N. McIntyre proves she is "blessed with both vision and genius" (BookPage) in this breathtaking tale-- part adventure story, part legend, and part Gothic novel-- what Publishers Weekly calls "a marvelous alternative history fable". In seventeenth-century France, Louis XIV rules with flamboyant ambition. From the Hall of Mirrors to the vermin-infested attics of the Chateau at Versailles, courtiers compete to please the king, sacrificing fortune, principles, and even the sacred bond between brother and sister. Marie-Josephe de la Croix looks forward to assisting her adored brother in the scientific study of the rare sea monsters the king has commissioned him to seek. For the honor of his God, his country, and his king, Father Yves de la Croix returns with his treasures, believed to be the source of immortality: one heavy shroud packed in ice... and a covered basin that imprisons a shrieking creature. The living sea monster, with its double tail, tangled hair, and gargoyle face, provides an intriguing experiment for Yves and the king. Yet for Marie-Josephe, the creature's gaze and exquisite singing foretell a different future... Soon Marie-Josephe is contemplating choices that defy the institutions which power her world. Somehow, she must find the courage to follow her heart and her convictions-- even at the cost of changing her life forever. A sensitive investigation of the integrity in all of us, "The Moon and the Sun" is destined to become a visionary classic.