Forests of the Heart by Charles de Lint 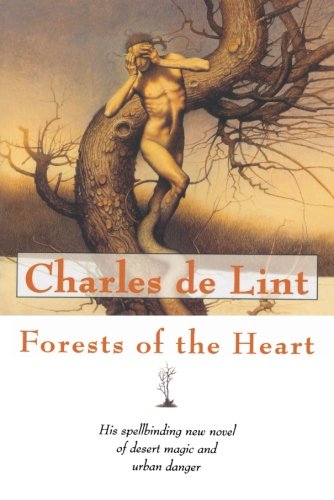 Forests of the Heart


In the Old Country, they called them the Gentry: ancient spirits of the land, magical, amoral, and dangerous. When the Irish emigrated to North America, some of the Gentry followed...only to find that the New World already had spirits of its own, called manitou and other such names by the Native tribes.Now generations have passed, and the Irish have made homes in the new land, but the Gentry still wander homeless on the city streets. Gathering in the city shadows, they bide their time and dream of power. As their dreams grow harder, darker, fiercer, so do the Gentry themselves--appearing, to those with the sight to see them, as hard and dangerous men, invariably dressed in black.Bettina can see the Gentry, and knows them for what they are. Part Indian, part Mexican, she was raised by her grandmother to understand the spirit world. Now she lives in Kellygnow, a massive old house run as an arts colony on the outskirts of Newford, a world away from the Southwestern desert of her youth. Outsider her nighttime window, she often spies the dark men, squatting in the snow, smoking, brooding, waiting. She calls them los lobos, the wolves, and stays clear of them--until the night one follows her to the woods, and takes her hand....Ellie, an independent young sculptor, is another with magic in her blood, but she refuses to believe it, even though she, too, sees the dark men. A strange old woman has summoned Ellie to Kellygnow to create a mask for her based on an ancient Celtic artifact. It is the mask of the mythic Summer King--another thing Ellie does not believe in. Yet lack of belief won't dim the power of the mast, or its dreadful intent.Donal, Ellie's former lover, comes from an Irish family and knows the truth at the heart of the old myths. He thinks he can use the mask and the "hard men" for his own purposes. And Donal's sister, Miki, a punk accordion player, stands on the other side of the Gentry's battle with the Native spirits of the land. She knows that more than her brother's soul is at stake. All of Newford is threatened, human and mythic beings alike.Once again Charles de Lint weaves the mythic traditions of many cultures into a seamless cloth, bringing folklore, music, and unforgettable characters to life on modern city streets.