The Mount by Carol Emshwiller 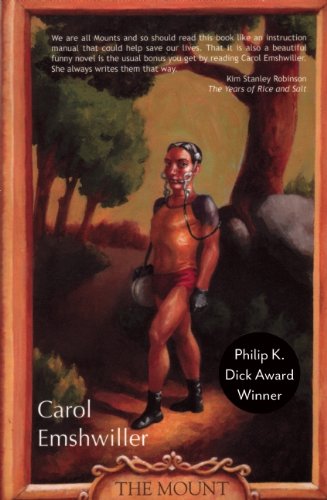 * Nominated for the Impac AwardCharley is an athlete. He wants to grow up to be the fastest runner in the world, like his father. He wants to be painted crossing the finishing line, in his racing silks, with a medal around his neck. Charley lives in a stable. He isn't a runner, he's a mount. He belongs to a Hoot: The Hoots are alien invaders. Charley hasn't seen his mother for years, and his father is hiding out in the mountains somewhere, with the other Free Humans. The Hoots own the world, but the humans want it back. Charley knows how to be a good mount, but now he's going to have to learn how to be a human being.

"I've been a fan of Carol Emshwiller's since the wonderful Carmen Dog. The Mount is a terrific novel, at once an adventure story and a meditation on the psychology of freedom and slavery. It's literally haunting (days after finishing it, I still think about all the terrible poetry of the Hoot/Sam relationship) and hypnotic. I'm honored to have gotten an early look at it."

—Glen David Gold"Carol Emshwiller's The Mount is a wicked book. Like Harlan Ellison's darkest visions, Emshwiller writes in a voice that reminds us of the golden season when speculative fiction was daring and unsettling. Dystopian, weird, comedic as if the Marquis de Sade had joined Monty Python, and ultimately scary, The Mount takes us deep into another reality. Our world suddenly seems wrought with terrible ironies and a severe kind of beauty. When we are the mounts, who—or what—is riding us?

—Luis Alberto Urrea"We are all Mounts and so should read this book like an instruction manual that could help save our lives. That it is also a beautiful funny novel is the usual bonus you get by reading Carol Emshwiller. She always writes them that way."

—Kim Stanley Robinson"This novel is like a tesseract, I started it and thought, ah, I see what she's doing. But then the dimensions unfolded and somehow it ended up being about so much more."

—Maureen F. McHugh"The Mount is so extraordinary as to be unpraiseable by a mortal such as I. I had to keep putting it down because it was so disturbing then picking it up because it was so amazing. A postmodernist would call it The Eros of Hegemony, but I'm no postmodernist. Nearly every sentence is simultaneously hilarious, prophetic, and disturbing. This person needs to be really, really famous."

—Paul Ingram, Prairie Lights Bookstore"Brilliantly conceived and painfully acute in its delineation of the complex relationships between masters and slaves, pets and owners, the served and the serving, this poetic, funny and above all humane novel deserves to be read and cherished as a fundamental fable for our material-minded times."

—Publishers Weekly"Adult/High School - This veteran science-fiction writer is known for original plots and characters, and her latest novel does not disappoint, offering an extraordinary, utterly alien, and thoroughly convincing culture set in the not-too-distant future. Emshwiller brings readers immediately into the action, gradually revealing the takeover of Earth by the Hoots, otherworldly beings with superior intelligence and technology. Humans have become the Hoots' "mounts," and, in the case of the superior Seattle bloodline, valuable racing stock. Most mounts are well off, as the Hoots constantly remind them, and treated kindly by affectionate owners who use punishment poles as rarely as possible. No one agrees more than principal narrator Charley, a privileged young Seattle whose rider-in-training will someday rule the world. The adolescent mount's dream is of bringing honor to his beloved Little Master by becoming a great champion like Beauty, his sire, whose portrait decorates many Hoot walls. When Charley learns that his father now leads the renegade bands called Wilds, he and Little Master flee. This complex and compelling blend of tantalizing themes offers numerous possibilities for speculation and discussion, whether among friends or in the classroom."