Bold As Love by Gwyneth Jones 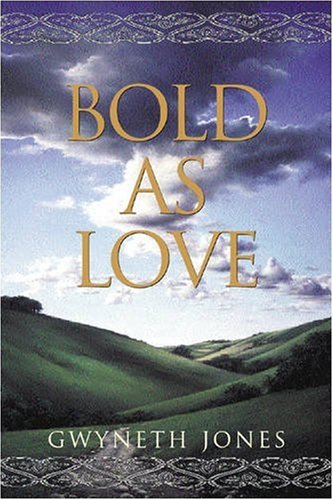 
Imagine John L:ennon met Mick Jagger around 1968, really hit it off, went through the collapse of modern civilisation together, and changed from rockstars into genuine heroes. And came out on the other side ruling England. And imagine they were both in love with the same girl, and this gorgeous babe they both adored turned out to be ...But this story isn't actually set in 1968, it's an alternate Now, and Fiorinda is no hapless sixties rock chick, but a formidable power in her own right: a child of our times and a timeless heroine. Bold As Love is an evocative Arthurian fantasy in which cultural icons (rock and roll stars) are cast as man of destiny, peerless warrior companion at his side, with a band of faithful companions, a princess in jeopardy, battle scenes, fancy dress, Celtic mythology, true romance, a wicked magician, the Holy Grail ...More magical than the classic Divine Endurance, more exciting and moving than the award-winning White Queen: Bold As Love is a shamelessly romantic fantasy about England that asks what would happen to the rock nobility if all those protest songs and idealist opinions were put to the test ...