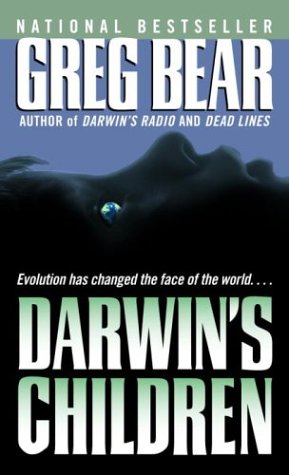 
Greg Bear’s Nebula Award–winning novel, Darwin’s Radio, painted a chilling portrait of humankind on the threshold of a radical leap in evolution—one that would alter our species forever. Now Bear continues his provocative tale of the human race confronted by an uncertain future, where “survival of the fittest” takes on astonishing and controversial new dimensions.DARWIN’S CHILDRENEleven years have passed since SHEVA, an ancient retrovirus, was discovered in human DNA—a retrovirus that caused mutations in the human genome and heralded the arrival of a new wave of genetically enhanced humans. Now these changed children have reached adolescence . . . and face a world that is outraged about their very existence. For these special youths, possessed of remarkable, advanced traits that mark a major turning point in human development, are also ticking time bombs harboring hosts of viruses that could exterminate the “old” human race. Fear and hatred of the virus children have made them a persecuted underclass, quarantined by the government in special “schools,” targeted by federally sanctioned bounty hunters, and demonized by hysterical segments of the population. But pockets of resistance have sprung up among those opposed to treating the children like dangerous diseases—and who fear the worst if the government’s draconian measures are carried to their extreme.Scientists Kaye Lang and Mitch Rafelson are part of this small but determined minority. Once at the forefront of the discovery and study of the SHEVA outbreak, they now live as virtual exiles in the Virginia suburbs with their daughter, Stella—a bright, inquisitive virus child who is quickly maturing, straining to break free of the protective world her parents have built around her, and eager to seek out others of her kind.But for all their precautions, Kaye, Mitch, and Stella have not slipped below the government’s radar. The agencies fanatically devoted to segregating and controlling the new-breed children monitor their every move—watching and waiting for the opportunity to strike the next blow in their escalating war to preserve “humankind” at any cost.From the Hardcover edition.

#5 | SCORE: 28
Queen of Angelsby Greg Bear
More from this author