Martin Martin’s on the Other Side by Mark Wernham 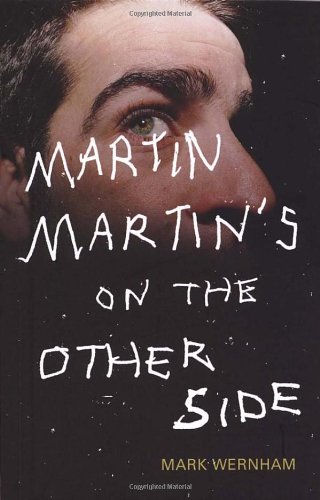 Martin Martin’s on the Other Side


An episode of Porn Disco, the latest luxury Dermo Shower, a day's work at the Security Department and fistfuls of drugs: this is the daily life of Jensen Interceptor, 'ace' government spy. Fresh out of Study Centre 16, Jensen is ambitious; he wants to pay off his student debts as soon as possible and blag his way to the top, helping the government instil its dream and mantra: Unity and Success. And there will be other rewards: a life of government-sanctioned vice is guaranteed, he'll get to live out his days in the floodlit safety of south London, never venturing into the wastelands of the north with its povos and tramps. His first assignment is a simple one: keep an eye on Reg Rankin, a low-level security threat and leader of the Martin Martinists, a small group who believe that Martin Martin, a phoney TV psychic consigned to the daytime schedules back in 2008, was the saviour and a prophet.He was about to reveal world-altering truths. Then the government murdered him. Now the Martin Martinists are plotting the Revelation, which will finally bring justice, truth, revenge. With the help of the Makeover Team, Jensen acquires a new identity and infiltrates this small cell. And this isn't without its benefits - there's a pretty girl called Claire. Then the floating starts. Jensen floats out of the window. Or he suddenly finds himself underwater but thousands of feet above the ground. Or he shuts his eyes and finds himself in the past, in the TV studio with Martin Martin. The world is not what it seemed. It is turned upside down, sometimes literally. An astonishing debut told in a unique, crazed voice, "Martin Martin's On the Other Side" breathes new life into the dystopian tradition. Like "A Clockwork Orange and 1984" before it, this is a skewed and frightening vision of the not too distant future - but also an unforgettably funny one.