Report to the Men’s Club by Carol Emshwiller 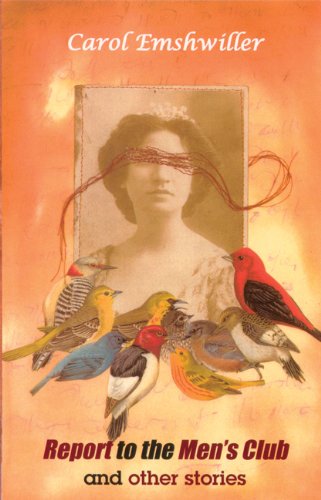 Report to the Men’s Club


What if the world ended on your birthday—and no one came? What if your grandmother was a superhero? Recommended to readers of Judy Budnitz, Geoff Ryman, Aimee Bender, and Grace Paley this fourth collection by the wonderful Carol Emshwiller includes the Nebula winning story "Creature.""These short stories have a mysterious glow."—JANE"Carol Emshwiller’s stories are wonder-filled, necessary, and beautifully crafted.”

—Samuel R. Delany"I read one of the stories in Carol Emshwiller's new collection, Report to the Men's Club, in progress several years ago and have thought about it ever since. I could even quote you lines! And now, having read the rest of the elegant, complex, insightful stories, I know she's done the same thing to me again eighteen times over! Emshwiller knows more about men and mortality and love and loss and writing and life than anybody on the planet! Dazzling, dangerous, devastating writer! Unforgettable (and I mean that literally!) collection! Wow! Wow! Wow!"

—Connie Willis"Carol Emshwiller (Carmen Dog, etc.) lends her elegant wit to Report to the Men's Club, a collection of 19 fantastic short fictions treating the war between the sexes. Such tales as "Grandma," "Foster Mother" and "Prejudice and Pride" are brim-full of wry insights into male-female relationships. Testimonials from Samuel R. Delaney, Maureen McHugh, Terry Bisson and Connie Willis, among other big names, should send this one into extra printings."

—Publishers Weekly"A daring, eccentric, and welcome observer of darkly human ways emerges from these 19 motley tales. Often writing in an ironical first-person voice, storywriter and novelist Emshwiller (Leaping Man Hill, 1999, etc.) assumes the persona of the outsider or renegade who flees the community as if to test boundaries and possibilities. In "After All," the narrator is a grandmother who decides to set out on a "makeshift journey" in her bathrobe and slippers simply because it is time. The setting is vague: she flaps through the town and then into the hills, pursued, she is sure, by her children, and, in the end, she is merely happy not "to miss all the funny things that might have happened later had the world lasted beyond me." Both in "Foster Mother" and "Creature," the mature, quirky narrators take on the care of an abandoned, otherworldly foundling and attempt to test their survival together in the wilds. In other stories, a character's affection for a scarred pariah forces her out of her home and through a stormy transformation-as in the sensationally creepy "Mrs. Jones." Of the two middle-aged spinster sisters, Cora and Janice, Janice is the fattish conspicuous one who decides to tame and civilize at her own peril the large batlike creature she finds wounded in the sisters' apple orchard. Janice does get her husband, and through skillful details and use of irony, the story becomes a chilling, tender portrait of the sisters' dependence and fragility. At her best, Emshwiller writes with a kind of sneaky precision by drawing in the reader with her sympathetic first person, then pulling out all recognizable indicators; elsewhere, as the long-winded "Venus Rising" (based on work by Elaine Morgan),the pieces read like way-far-out allegories. A startling, strong fourth collection by this author—look for her upcoming The Mount."

—Kirkus Reviews"This strange collection of stories is populated by creatures of all sorts, human and alien. The collection-closing title piece takes the form of a speech given to a men's club by someone who has just been initiated into membership, despite the accident of birth that made her biologically female. The other stories range topically from the faith of a scribe in "Modillion" to love at first sight in "Nose." What makes them satisfying is the personalities of their characters. Even the shortest pieces present characters who possess all the force of real persons who might be standing beside us. For the most part, Emshwiller keeps the stories simple, engaging us with their characterization rather than fast, copious action. We stay engaged because they rend

#1 | SCORE: 29
The Mountby Carol Emshwiller
More from this author