The Lathe of Heaven by Ursula K. Le Guin 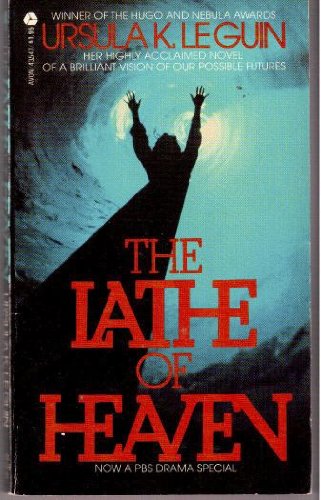 The Lathe of Heaven


This is the 9th Avon printing.

Ursula K. Le Guin is one of science fiction's greatest writers. She is also an acclaimed author of powerful and perceptive nonfiction, fantasy, and literary fiction. She has received many honors, including six Nebula and five Hugo Awards, the National Book Award, the Pushcart Prize, the Newbery, the Pilgrim, the Tiptree, and citations by the American Library Association. She has written over a dozen highly regarded novels and story collections. Her SF masterworks are The Left Hand of Darkness (1969), The Dispossessed (1974), and The Lathe of Heaven (1971).

George Orr has dreams that come true--dreams that change reality. He dreams that the aunt who is sexually harassing him is killed in a car crash, and wakes to find that she died in a wreck six weeks ago, in another part of the country. But a far darker dream drives George into the care of a psychotherapist--a dream researcher who doesn't share George's ambivalence about altering reality.

The Lathe of Heaven is set in the sort of worlds that one would associate with Philip K. Dick, but Ms. Le Guin's treatment of the material, her plot and characterization and concerns, are more akin to the humanistic, ethically engaged, psychologically nuanced fiction of Theodore Sturgeon. The Lathe of Heaven is an insightful and chilling examination of total power, of war and injustice and other age-old problems, of changing the world, of playing God. --Cynthia Ward

#5 | SCORE: 29
The Other Windby Ursula K. Le Guin
More from this author