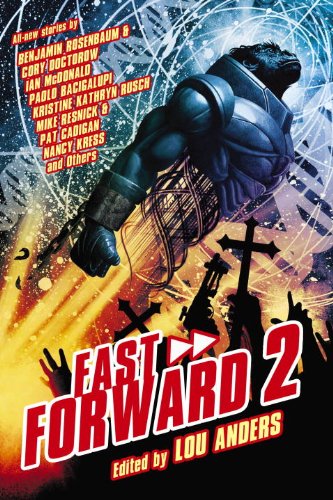 
When Fast Forward 1 debuted in February 2007, it marked the first major all-original, all-SF anthology series to appear in some time—and it was met with a huge outpouring of excitement and approbation from the science fiction community. No less than seven stories from Fast Forward 1 were chosen to be reprinted a total of nine times in the four major "Best of the Year" retrospective anthologies, a wonderful testament to the quality of contributions in our inaugural book. What’s more, Fast Forward 1 was hailed repeatedly as leading the charge in a return of original, unthemed anthologies series (several more have since appeared in our wake). Now the critically-acclaimed, groundbreaking series continues, featuring all new stories from: Paul Cornell, Kay Kenyon, Chris Nakashima-Brown, Nancy Kress, Jack Skillingstead, Cory Doctorow and Benjamin Rosenbaum, Jack McDevitt, Paul McAuley, Mike Resnick and Pat Cadigan, Ian McDonald, Kristine Kathryn Rusch, Karl Schroeder and Tobias S. Buckell, Jeff Carlson and Paolo Bacigalupi.