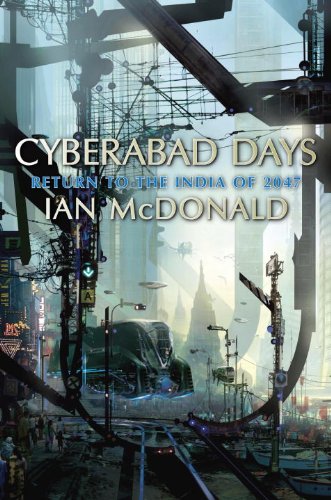 
Ian McDonald’s River of Gods—called a "masterpiece" by Asimov’s Science Fiction and praised by the Washington Post as "a major achievement from a writer who is becoming one of the best SF novelists of our time"—painted a vivid picture of a near future India, 100 years after independence. It revolutionized SF for a new generation by taking a perspective that was not European or American. Nominated for the Hugo Award and the Arthur C. Clarke Award, and winning the BSFA Award, the rich world of the novel has inspired McDonald to revisit its milieu in a series of short stories, all set in the world of River of Gods. Cyberabad Days is a triumphant return to the India of 2047, a new, muscular superpower of one and a half billion people in an age of artificial intelligences, climate-change induced drought, water wars, strange new genders, genetically improved children that age at half the rate of baseline humanity, and a population where males outnumber females four to one. India herself has fractured into a dozen states from Kerala to the headwaters of the Ganges in the Himalayas. Cyberabad Days is a collection of seven stories, one Hugo nominee and one Hugo winner among them, as well as a thirthy-one thousand word original novella. As with everything Ian McDonald does, it is sure to be one of the most talked-about books of the year. Featuring:Sanjeev and Robotwallah (Chosen for The Year's Best Science Fiction: Twenty-Fifth Annual Collection and Year's Best SF 13) What happens to the boy-soldier roboteers when the war of Separation is over?Kyle meets the River A young American in Varanas learns the true meaning of "nation building" in the early days of a new country.The Dust Assassin Feuding Rajasthan water-rajas find that revenge is a slow, subtle process.An Eligible Boy An Indian take on Cyrano de Bergerac.The Little Goddess (Hugo nominee for best novella of 2006) In near future Nepal, a child-goddess discovers what lies on the other side of godhood.The Djinn’s Wife (Hugo for best novelette and BSFA short-fiction winner of 2007) A minor Delhi celebrity falls in love with an artificial intelligence, but is it a marriage of heaven and hell?Vishnu at the Cat Circus A genetically improved "Brahmin" child finds himself left behind as he grows through the final generation of humanity.

#3 | SCORE: 29
River of Godsby Ian McDonald
More from this author