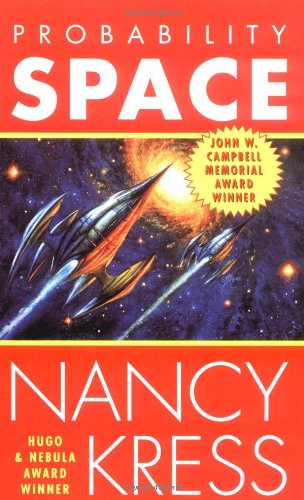 
Nancy Kress cemented her reputation in SF with the publication of her multiple-award–winning novella, “Beggars in Spain,” which became the basis for her extremely successful Beggars Trilogy (comprising Beggars in Spain, Beggars and Choosers, and Beggars Ride).And now she brings us Probability Space, the conclusion of the trilogy that began with Probability Moon and then Probability Sun, which is centered on the same world as Kress’s Nebula Award-winning novelette, “Flowers of Aulit Prison.” The Probability Trilogy has already been widely recognized as the next great work by this important SF writer.In Probability Space, humanity’s war with the alien Fallers continues, and it is a war we are losing. Our implacable foes ignore all attempts at communication, and they take no prisoners. Our only hope lies with an unlikely coalition: Major Lyle Kaufman, retired warrior; Marbet Grant, the Sensitive who’s involved with Kaufman; Amanda, a very confused fourteen-year-old girl; and Magdalena, one of the biggest power brokers in all of human space.As the action moves from Earth to Mars to the farthest reaches of known space, with civil unrest back home and alien war in deep space, four humans--armed with little more than an unproven theory--try to enter the Fallers’ home star system. It’s a desperate gamble, and the fate of the entire universe may hang in the balance.

#2 | SCORE: 56
Beggars and Choosersby Nancy Kress
More from this author