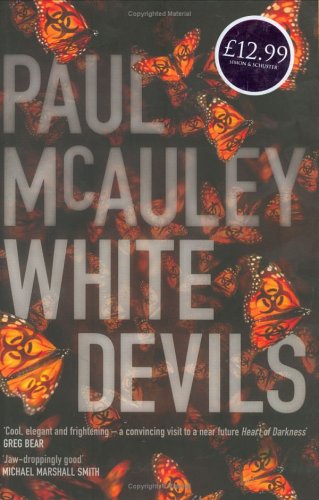 
Nicholas Hyde, a volunteer working with a humanitarian charity in Africa, is part of a team investigating an apparent wartime atrocity. The team is ambushed, and small, ape-like creatures - pale, fierce, and preternaturally strong - slaughter most of the group in a matter of minutes. 'Diable blanc', the team's government observer calls them - 'white devils' - but after the rescue he falls in with the official story and claims instead that he saw only rebel troops in body paint. The cover-up seems to originate from Obligate, the company that effectively owns the Congo. Shell-shocked and angry, Nicholas refuses to cooperate. He knows what he saw, and he will tell the world the truth. And that's when people around him start to die. Only by discovering the secret behind the white devils can Nick protect himself from the forces arrayed against him. Together with Teddy Yssel, a bush pilot who survived an earlier attack, and Elspeth Faber, seeking justice after the murder of her scientist father, Nick journeys into the heart of darkness of 21st century Africa: the Dead Zone. But also heading for the Dead Zone is the American mercenary, Cody Corbin. Evangelist, eco-warrior, terrorist: sent to cleanse the abominations from God's good Earth, and anyone who gets in his way is going straight to Hell...