River of Gods by Ian McDonald 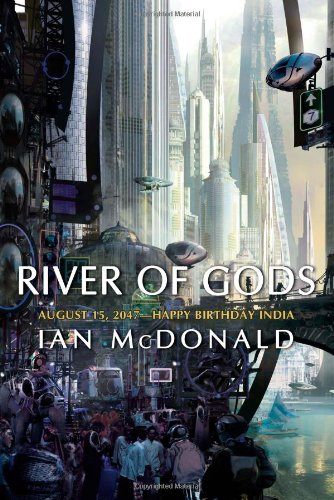 
As Mother India approaches her centenary, nine people are going about their business — a gangster, a cop, his wife, a politician, a stand-up comic, a set designer, a journalist, a scientist, and a dropout. And so is Aj — the waif, the mind-reader, the prophet — when she one day finds a man who wants to stay hidden.In the next few weeks, they will all be swept together to decide the fate of the nation.River of Gods teems with the life of a country choked with peoples and cultures — one and a half billion people, twelve semi-independent nations, nine million gods. Ian McDonald has written the great Indian novel of the new millennium, in which a war is fought, a love betrayed, a message from a different world decoded, as the great river Ganges flows on.

#2 | SCORE: 30
The Dervish Houseby Ian McDonald
More from this author