The Dervish House by Ian McDonald 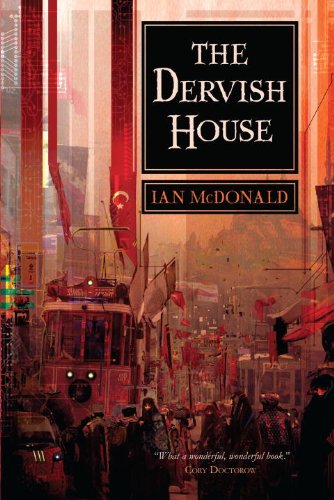 
It begins with an explosion. Another day, another bus bomb. Everyone, it seems, is after a piece of Turkey. But the shock waves from this random act of twenty-first-century pandemic terrorism will ripple further and resonate louder than just Enginsoy Square. Welcome to the world of The Dervish House—the great, ancient, paradoxical city of Istanbul, divided like a human brain in the great, ancient, equally paradoxical nation of Turkey. The year is 2027 and Turkey is about to celebrate the fifth anniversary of its accession to the European Union, a Europe that now runs from the Aran Islands to Mount Ararat. Population pushing one hundred million, Istanbul swollen to fifteen million, Turkey is the largest, most populous, and most diverse nation in the EU, but also one of the poorest and most socially divided. It’s a boom economy, the sweatshop of Europe, the bazaar of central Asia, the key to the immense gas wealth of Russia and central Asia. Six characters, five days, three interconnected story strands, one central common core—the eponymous dervish house, a character in itself—that spins all these players together in a weave of intrigue, conflict, drama, and a ticking clock of a thriller.