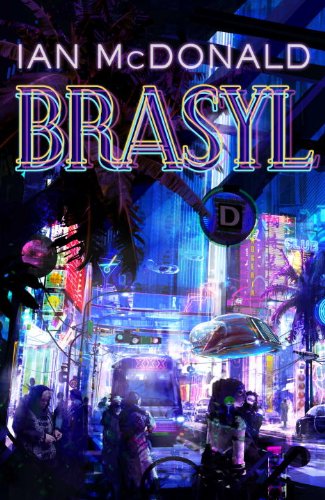 
Think Bladerunner in the tropics... Be seduced, amazed, and shocked by one of the world’s greatest and strangest nations. Past, present, and future Brazil, with all its color, passion, and shifting realities, come together in a novel that is part SF, part history, part mystery, and entirely enthralling. Three separate stories follow three main characters: Edson is a self-made talent impresario one step up from the slums in a near future São Paulo of astonishing riches and poverty. A chance encounter draws Edson into the dangerous world of illegal quantum computing, but where can you run in a total surveillance society where every move, face, and centavo is constantly tracked? Marcelina is an ambitious Rio TV producer looking for that big reality TV hit to make her name. When her hot idea leads her on the track of a disgraced World Cup soccer goalkeeper, she becomes enmeshed in an ancient conspiracy that threatens not just her life, but her very soul. Father Luis is a Jesuit missionary sent into the maelstrom of 18th-century Brazil to locate and punish a rogue priest who has strayed beyond the articles of his faith and set up a vast empire in the hinterland. In the company of a French geographer and spy, what he finds in the backwaters of the Amazon tries both his faith and the nature of reality itself to the breaking point. Three characters, three stories, three Brazils, all linked together across time, space, and reality in a hugely ambitious story that will challenge the way you think about everything.